This post was originally posted to UnderTheC, the UNC-CH Marine Sciences graduate student blog site under the title: “A summer pondering the stormwater ponds“.  Adam Gold is a second-year master’s student in UNC’s Curriculum in Environment and Ecology (ENEC) who is currently working at the UNC Institute of Marine Sciences at Morehead City and a member of the Piehler Lab researching urban stormwater and its effects on water quality. Follow Adam Gold on twitter at @acgold_04 for tweets about science and stormwater.

This past summer, I spent my days braving the stormwater ponds of Camp Lejeune for the sake of science.  While I didn’t discover the creature from the black lagoon or have a run-in with an American Alligator, I found the next best thing.  This blog post is about what I found lurking in the depths of coastal stormwater ponds: interesting nitrogen cycling!

Have you ever wondered, “what’s the deal with that giant pond next to *insert big-box store* parking lot?”  Those ponds collect water that runs off impervious surfaces like roads and roofs when it rains, and too much stormwater has negative effects on stream health and water quality. Pollutants like nitrogen can build up on impervious surfaces and get washed into streams during storms. Too much nitrogen in water bodies causes issues like algal blooms that lead to fish kills and loss of important habitats.  A common way to manage stormwater in the US and in coastal North Carolina is by using stormwater retention ponds, those giant ponds that you might see in neighborhoods and next to parking lots.  The ponds are intended to collect stormwater and remove pollutants, so that cleaner water flows out of the ponds and into an adjacent stream. Retention ponds make up about 60% of all stormwater management structures in coastal North Carolina, so they likely have a big impact on water quality.  I spent this past summer sampling stormwater ponds on US Marine Corps Base Camp Lejeune to see how they handled nitrogen that flows into them from stormwater.

The overall goal of this project was to see if coastal stormwater ponds removed nitrogen or added nitrogen to downstream water bodies and see if their function changed over time.  The strategy was to sample five different ponds spanning a range of ages to see how pond age affected nitrogen cycling in sediments on the pond bottom.  Then we sampled one pond intensively to see how different spots within the pond cycled nitrogen, and we also monitored nitrogen in water flowing into and out of the pond.  You may ask, “How does one sample nitrogen cycling in a stormwater pond?”, and my answer to that is, “With LOTS of field equipment!”. 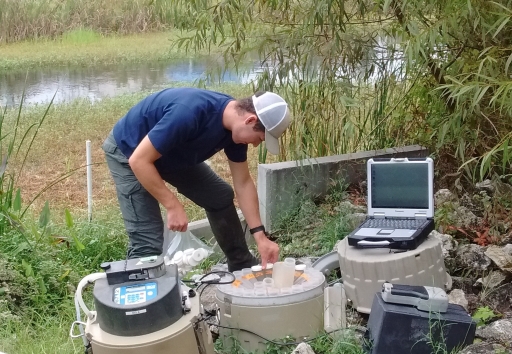 For the pond sampling, Suzanne Thompson (the Piehler Lab manager) and I used an ancient canoe (complete with decorative 1980’s spray paint) and a PVC sediment corer to collect sediment cores from the bottom of each pond. We took the sediment cores back to the UNC Institute of Marine Sciences and measured the flux of dissolved gases (N2, O2, Argon) and nutrients from each core. To monitor nitrogen entering and leaving the pond, we enlisted the “R2-D2” of water quality monitoring, the ISCO automatic water sampler.  Not only does the ISCO measure the flow of water, it automatically takes samples during storms so we don’t have to! We used three ISCOs and outfitted each one with a water quality probe, an acoustic water velocity probe, and a pressure probe to measure water depth.  We monitored the pond for six months (June 2016 – January 2017), took routine water samples every two weeks, and collected storm samples from five storms using the ISCOs.

After all that sampling, here’s what we found:

(1)  Coastal stormwater ponds during the summer were EXTREMELY nitrogen limited, and ponds become more nitrogen limited as they age. Nitrogen limitation is basically the same thing as not having enough eggs to bake a cake.  Let’s say you’re crunched for time and decide to make a cake from a box mix (and you have a pantry full of cake box mixes), but you realize after you pour the mix into a bowl that the eggs you thought you had in the fridge have mysteriously vanished!  In this case, the eggs represent nitrogen – If eggs were to suddenly appear, you could make as much cake as you want.   In the case of the pond, water with a ratio of nitrogen to phosphorus that is less than 16 is considered nitrogen limited, so if nitrogen were introduced, algae and other organism would take it up really quickly. The five ponds we sampled had nitrogen to phosphorus ratios between 5 (youngest pond) and 1 (oldest pond).

(2)  Coastal pond sediments created more nitrogen than they removed, and the net addition of nitrogen increased through the summer. The prevailing idea with stormwater ponds is that they permanently remove nitrogen through a process called denitrification.  We found that they actually do the exact opposite during the summer and add nitrogen through a process called nitrogen fixation.  We think this happened because stormwater ponds become stratified during the summer, so the warmer top water doesn’t mix with the cooler bottom water.  Unlike James Bond’s martinis, these ponds are neither shaken nor stirred.  When this happens, microbes break down organic matter in sediments and remove oxygen from the bottom water.  Phosphorus is released from sediments because of the lack of oxygen, and the sediments become extremely nitrogen limited and make their own nitrogen through nitrogen fixation.  Pond sediments added even more nitrogen later in the summer, so this supports the idea that pond stratification and a more extreme temperature difference between the top and bottom water is to blame.

(3)  Algae were the main source of nitrogen removal during the summer. For each sampling trip to our monitored pond, we measured how much nitrogen and how much algae (measured by chlorophyll-a) came into and out of the pond.  We found that the ponds during the summer were removing almost all of the nitrogen that washed into them: that’s good news!  But they also created HUGE amounts of algae, which is not a good thing. Using a few ratios from the scientific literature to determine the amount of nitrogen contained inside algae, we found that almost all of the nitrogen the pond removed during the summer was used by algae to grow, instead of being removed through denitrification.  During the fall, there was a large amount of nitrogen removal that wasn’t explained by an increase in algae. Since the nitrogen wasn’t taken up by algae to grow, we think this is probably denitrification.

The fact that stormwater ponds are removing nitrogen from surface water is great, but the increase in algae and nitrogen fixation instead of removal in the bottom water during summer isn’t great news for downstream water quality.  On the bright side, we think that this only happens during the summer.  Also, we think that managers could excavate organic-rich sediment from the pond or install a pond pump to circulate the water during summer to reduce the ponds’ negative effects on water quality.  If you happen to be a coastal real estate developer, maybe think twice about installing a pond and opt for a nice stormwater wetland!